I was very pleased to be invited last week to speak to a group of Japanese scholars from Oita University who were on a visit to Kent to investigate cultural regeneration led by Teresa Smith from the University of Oxford.

I spoke about my research into the social impacts of cultural regeneration and we had a detailed discussion of the recent evolution of British regeneration policy from the Single Regeneration Budget era to the new Local Enterprise Partnerships.  You can see my presentation below.

*I’d love to be able to credit the artists involved in the first picture on my slides.  It was emailed to me in 2007 by a participant in some research I was doing at the time and I think it’s a fantastic image.  If you have any info on this, please let me know!

I have started a new blog and a new twitter account to record the progress of my PhD research into the cultural regeneration of seaside towns in the UK.  I’ll be posting fairly regular updates on my research, which is now into its last 12 months, and also using them as a forum for discussion and dissemination of my results. 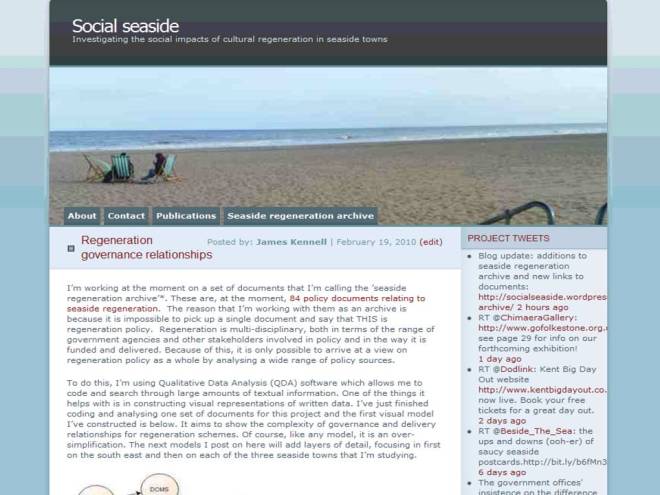 Much of the discussion about symbolic capital focuses on the cultural and social capital that individuals or groups don’t have, and how this can explain behaviour, attitudes and achievement.  Because of this we often fall into the trap of defining symbolic capital in negative terms, or explaining it by setting out the consequences of it’s absence.  I was fortunate yesterday to stumble across an example of how cultural and symbolic capital functions within an elite group in a positive sense, to support the values of the group as a whole and give advantage to it’s members individually.  The quotation below is from Nigel Nicolson, former MP and son of Vita Sackville-West.  The quotation comes from Geert Mak’s excellent In Europe.

“My inheritance was not extensive in the financial sense, but rich in contacts and influence.  And it lent me a natural self-confidence, a background against which I could place myself.  My father put it this way: ‘I detested the rich, but I was wild about learning, science, intellect, the mind.  I have always taken the side of the underdog, but I have also adhered to the principle of the aristocracy.”

In this quotation we see the interplay of social and cultural capital, the links to education and the development of a faux-essentialist conception of the self and the worth of certain conceptions of intellectual endeavour.  Finally, the values of the elite are held up as a moral principle.

There are a fascinating couple of posts over on the Volumizer blog about Bourdieu’s conception of capital.  Both the posts are highly critical – the first on capital generally as a concept in Bourdieu’s work and the second on cultural capital as a particular concept.  Whilst the writing is clearly concerned with the effect of a Bourdieu-inspired response to education, a subject I’m not qualified to pronounce on although I am aware of the debate, I find the criticism of Bourdieu as an enemy of the left (based on his use of the term ‘capital’) problematic.

Bourdieu is concerned with the dominance of power through legitimation, the role assigned to ideology for Marx or hegemony for the Italian Marxist, Gramsci.  However, Bourdieu criticizes these views for neglecting the symbolic dimensions of class relations, or for relegating these to the superstructure of a economically overdetermined system.  The Marxist model is critiqued by Bourdieu on the basis of its specificity – it is the growth of education and cultural markets in advanced societies that has undermined the power of the Marxist model.  To overcome this problem, Bourdieu proposes a political economy of symbolic goods that forms a chiastic structure with the economic field; this division between economic and symbolic power is then replicated within all areas of struggle for power in society and, as society is struggle for Bourdieu, it is this chiastic structure that overdetermines the social world.

Ultimately, Bourdieu is clear that all fields of struggle are subsumed into the field of power and that this field is dominated by the struggle for economic capital.  The problem comes when commentators misuse Bourdieu, as I suspect may be happening within the ‘educational left’ that the Volumizer critiques.  Whilst it might be exciting and socially more comfortable to think that adressing cultural issues alone can change society, it is a mistake of the left to read Bourdieu as providing a competing system to Marx or of avoiding the key issue of inequality.  To use Bourdieu as intended is to unmask the symbolic means by which social inequalities are reproduced in society and to shine a light on the mis-recognised relations of capital that structure it.