On 11th December 2013, we’ve invited Graham Wason, the chairman of the campaign to cut Tourism VAT, to give a talk at the University of Greenwich.

Graham Wason is Chairman of the Campaign for Reduced Tourism VAT, which urges UK Government to reduce VAT on visitor accommodation and attractions to 5%, arguing that this will make the UK more competitive with the rest of the EU. Independent research shows this measure would create jobs and give a positive return to the Treasury of £2.6 billion over 10 years. He will present the work of the Campaign.  You can book your place at the event here. 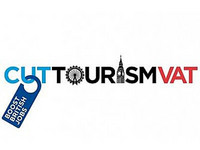 Graham is also Co-founder of All Being Well, which inspires people towards well-being, growth and fulfilment in life and work. What is the link between cutting tourism VAT and fulfilment in life and work? Is it to be found in Graham’ country of residence, Denmark, which has the highest rate of tourism VAT in the EU yet consistently tops the league of the world’s happiest countries? Graham will present the findings of the latest World Happiness Report and suggest an alternative route to fulfilment and happiness.

Graham Wason is Chairman of Cut Tourism VAT, the industry-wide campaign for reduced VAT on tourism, which he leads on behalf of Bourne Leisure, Merlin Entertainments, the British Hospitality Association and the British Association of Leisure Park Piers & Attractions.

Since 1993, he has prepared eight in-depth reports on the impact of reduced tourism VAT on UK jobs and the economy: www.cuttourismvat.co.uk .

Graham graduated in Hotel and Catering Management at the University of Surrey and worked in hotels in England, Wales, Germany and Nigeria, and as Hotel and Tourism Inspector for the consume magazine, ‘Holiday Which?’. He then spent nearly 20 years with Deloitte, where he was partner responsible for tourism and hospitality consulting and worked on 500 tourism projects in over 50 countries.

His roles have included Strategy Adviser to the World Travel & Tourism Council, Consultant to the United Nations World Tourism Organization, Special Adviser to a House of Lords Select Committee, Chairman of the Tourism Society and the British Consultants Bureau Tourism and Leisure Group, and member of the advisory boards of the University of Surrey School of Management and the Institute of Tourism Guiding.

Graham owns and overseas Cossington Park, a five-star gold award winning self-catering operation in Somerset. Graham is co-founder of All Being Well, which provides well-being, leadership development and coaching to companies and individuals. Whilst his professional activities are carried out primarily in the UK, Graham lives with his wife and son in Denmark.

This site uses Akismet to reduce spam. Learn how your comment data is processed.