Don’t wait for the state…

This is a short blog post that I’ve written for the Crossovers blog, that we’ve been developing to help stimulate some debate before the Crossovers event on 19th September, which I’ll blog about later in the week.  The post is based loosely on a chapter that I’ve written for the new Routledge Handbook of Cultural Tourism, which is being published in January 2013, and it is about the future of cultural regeneration.

As public funding for both culture and tourism continues to shrink, and with the private sector feeling the effect of an extended period of economic gloom, it is easy to think that the long boom in cultural regeneration is over.  For two decades and more, cities and towns in Europe have been through cultural regeneration schemes of one sort or another, often focussed on high-profile, expensive new cultural icons.

have cultural producers have bought into the cultural regeneration rhetoric?

The success stories that our attention is usually directed towards include Bilbao, Newcastle / Gateshead, Lille, Glasgow – cities that have used flagship cultural developments to help them grow their economies in response to decades of industrial change. 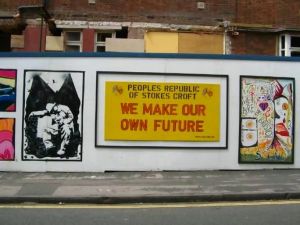 Right now, everywhere in Europe is facing the kinds of economic challenges that the regeneration schemes of the long boom were designed to tackle.  What role can the cultural sector play in meeting these challenges and who is going to pay for it?

We’ve heard for years how the cultural element of regeneration helps to promote things like community cohesion and sense of place, how it can address low aspirations and create new kinds of employment and educational opportunities, especially for young people, and how it can be used to re-brand and promote areas that are in need of investment, often through attracting high-spending cultural tourists.

What will be put to the test now is not whether civil servants and regeneration bureaucracies believe in the power of culture to achieve these things, or whether private sector investors understand the role of culture in attracting employers and employees to an area, but whether cultural producers have bought into the cultural regeneration rhetoric as much as policy-makers and funding bodies.

is this the new model for cultural regeneration?

In Stokes Croft in Bristol, local activists and artists came together to improve and promote their neighbourhood, from the bottom up.  This meant working at street level with residents and visitors and not waiting for the state to step in with grants or the private sector to open a new shopping centre to attract tourists.  Stokes Croft designated itself as Bristol’s cultural quarter and over time has become known as a cultural tourist destination famous for its vibrant street-art scene and its energetic DIY culture.  Sometimes this brought it into conflict with the local authority; the recent protests against the opening of a Tesco in the area are a testament to its continuing anti-establishment stance.

What has happened in Stokes Croft show us that the positive impacts of cultural regeneration can be achieved by cultural producers, activists and others working together as a community, without the need for masterplans, grants, public-private partnerships or consultants.    We’ve seen this approach being taken in cities across the world from Berlin to London to New York, but historically the developers move in and start buying things up once an area becomes ‘successful’.

Now the developers are keeping their hand in their pockets, is this the new model for cultural regeneration?

One response to “Don’t wait for the state…”

This site uses Akismet to reduce spam. Learn how your comment data is processed.